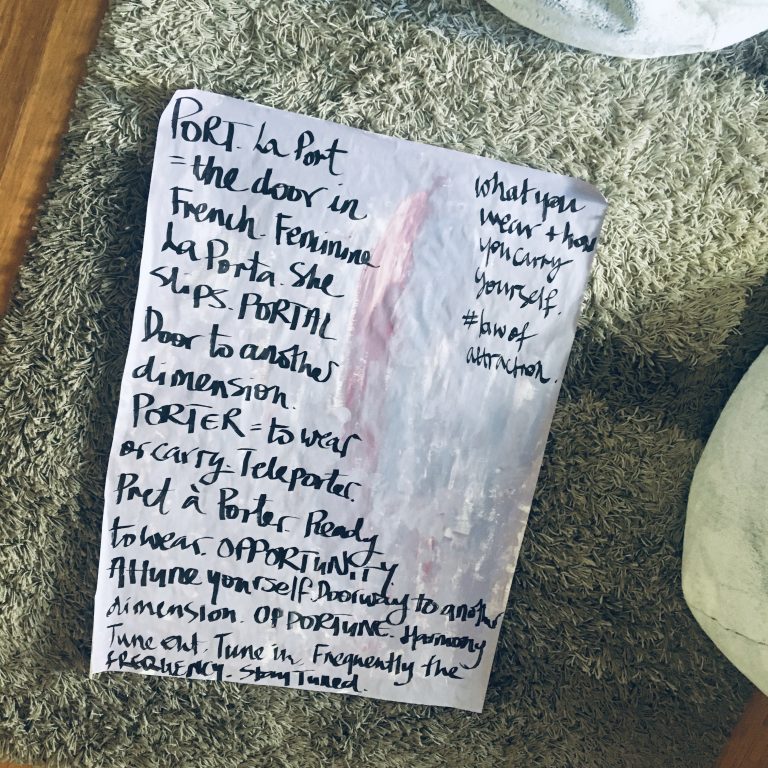 “You could do that,” he said, meaning two very big paintings of some black crosses and circles on a plain cream background.

“I don’t think it’s about what you can do but what you want to,” I replied, not feeling one ounce of annoyance.

“Because anyone can do that,” I concluded.

For me art is about a feeling that I want to experience.

I watched many movies and documentaries on artists before picking up a brush myself.

When I was 32 I took a course on Gouache (a paint type) at The Fremantle Arts Centre and we had to bring in something we wanted to paint.

I brought in a postcard of Madame Bijoux.

It was in black and white from the 1930s Paris, my favourite time and place.

I am not that much of a fan of Paris but that time when artists and writers and circus performers and prostitutes and models and muses all mingled and got festive together has always spoken to me.

A guy I met in 2017, one of the two Phils in Dear Phil, the second in my Love Queen series, was a graffiti artist and jewellery designer from Paris and when I told him about my working life, he pronounced me a bohemian.

I’d never thought of myself as that.

But when I looked up the definition, a free spirit, I could relate.

My painting of Madam Bijoux was in bright yellow, black and white.

An artist there said she would buy it.

I painted another in black and white and was proud of it too.

Quirky, funny, imperfect and childlike as my drawings are.

I kept those paintings for years but when the Phil said he didn’t like them (in not so many words), I ended up decluttering them out of my life.

Last year I watched a YouTube clip on this artist in New York working with pastels and it looked fun.

I wanted to feel that too.

Perhaps it’s something in my body that feels it.

Or the mirror-neutrons in the brain.

After I did my 50 pictures and posted them on Locomotive Creations, I didn’t feel like it anymore.

I wanted to buy a black pen to write out something for the wall.

Then my boyfriend started telling me about this super thick marker he used to use for the street art that he did.

He showed me the pen and I got that feeling in my body.

My brain started envisioning what it would feel like to use it.

So I bought it.

While waiting for him in Officeworks I started seeing the picture I wanted to create.

It started last week when I walked to Officeworks and then took the long way home.

I could see the port with its giraffe cranes as I walked this pretty street.

And I started thinking about PORTALS.

For a long time when I was listening to the Abraham Law of Attraction videos from 2017-2018, I’d write different words and how they are connected.

Being an English Language teacher and all.

And that’s what I was doing with the portals.

When I got home, I wrote it in my journal and thought to post it on Instagram.

Till it all came together in the painting.

And this is the story of it.

But often as soon as I enjoy something my mind starts making plans for me to keep on doing it.

So it’s so nice to get back to this place of pure enjoyment.

It was good to find out that writing is the only thing that makes me spring out of the bed in the morning.

All the rest is just fun on the side.

I don’t regret it.

PrevPreviousHow I Write
NextWhy I Cry To ManifestNext