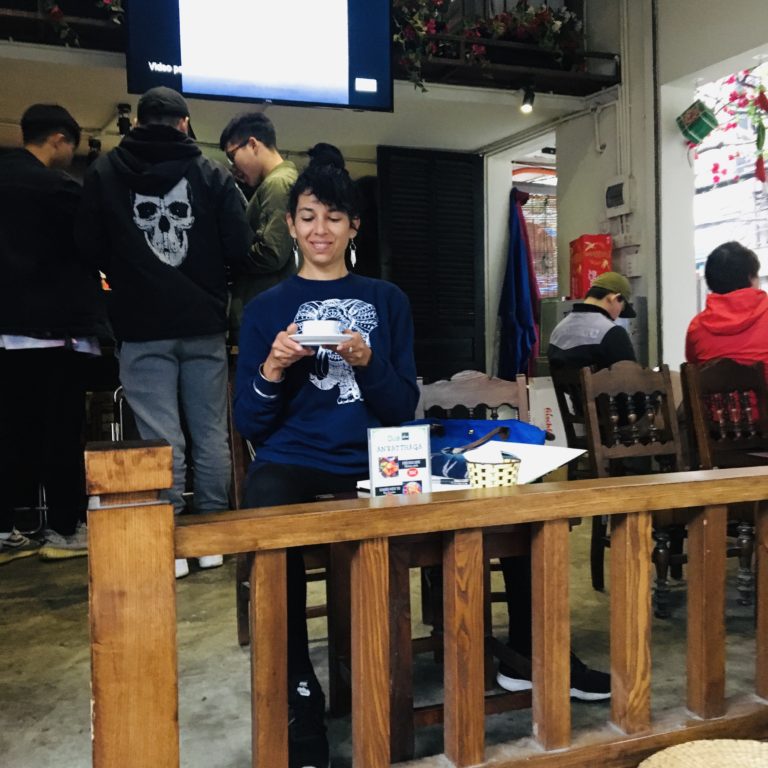 Hanoi in Winter… with Corona Virus!

The worst time to go to Hanoi is in winter, during the lunar New Year, with the Corona Virus. That’s when I was there.

I’d wanted to go to Hanoi ever since I had the brain surgery four years ago. Maybe I read about it on Andrea Balt’s Instagram. Definitely I did. So, as I was in the area in early February, after spending a month in Thailand and nine days in Laos, I decided I simply had to.

Actually no, I was going with the flow. I had planned to be away for five weeks at least and was booking my trip as I went. I wanted to feel the point at which I wanted to go home. Then the couple I’d rented my room to asked if they could stay longer, so I decided to definitely go to Hanoi and Hoi An.

The funny thing is that when I was in Chiang Mai, there was a TV in my room so I was watching the news and keeping updated with the virus situation.For the ten days in Laos, however, I had not seen any news and had deleted the social media apps off my phone. Perhaps if I had, I wouldn’t have gone.

In any case, I’m glad I did. Even though I did not LOVE it. I feel like one of those people who say “I’ve done Hanoi! I’ve done Hoi An.” I never understood those people. How can you do a place? Now I am one of them.

The first day my mission was to a) eat vegan Vietnamese food and b) find the train station and book the night train to Hoi An. I didn’t have a map but I had the rough outline on Google maps. I like to travel without the internet on my phone. It feels more fun to me. Instead, I’ll look it up and screenshot where I need to go while on wifi and hope my phone battery doesn’t die before I make it there. Often it does because I take so many photos. On this day it did.

I’ve thought too about buying a portable charger, but I quite like the adventure of being without phone and the presence it brings. I just ask people. So to find the train station, I’d find young people and ask as I went, then had the genius idea to go into a hotel to ask for a map. The lady wrote the name of the station down for me to show as I went. People would point me in the direction and indicate. I felt accomplished making it there and buying the ticket.

Since I feel I have a good sense of direction, I didn’t think getting back across the city to my hotel would be a problem. Instead I ended up at a cafe. In fact, as it turned out, I was just opposite the Temple of Literature. After an early grey tea and carrot cake, I headed across the street but was met with a sign that said, as of 3pm, when I’d asked the Irish couple leaving the cafe where I was and what the time was, that the site was closed.

As I’d soon find out, all the attractions had been closed just then, due to COVID-19. Vietnam had had ten or so cases at that point and while I was there five more, but managed to contain the spread by taking such measures and keeping schools closed for a further two weeks.

Unlike back home, the lunar new year is not a time of dragon parades through the streets, but when people go home to be with their families. Because of this, the regular walking tours run by university students were not on either. So what did I do during my four days there?

The architecture in Hanoi is so varied and interesting, from the French colonial style of the grand boulevards to the skinny buildings piled side by side and on top of each other. It is also a very green city with lots of trees.

I put vegan into my google maps and off I went. Often the adventure was in finding the places, walking there, and what I discovered on the way.

3. I learnt about the history

I went on the hop on hop off bus tour but didn’t get off. It was so cold, raining and the sites were closed anyway. Still, I enjoyed just sitting there. Then I came home and googled Ho Chi Minh.

4. I yelled “Goooood morning Vietnam!” out my window first thing every day

Before touching down in Hanoi, I didn’t even realise they had a winter, and I felt a bit down in the rain. But this morning ritual made me feel happy. I’d picked up “Spiritual Journey of the Peaceful Warrior” at a restaurant in Laos and took the advice to “get up and get moving” every day. It really does work like a charm.

5. I tried to find cosy cafes to sit at

The thing about the cafes in Hanoi is that they are made for summer, with wide open windows. And the tables and chairs are so small with no place for the knees. They are not made for writing at. I’d tried to go to a Starbucks on my second last day, but it seemed too cramped and moist in there and I was avoiding such excellent conditions for virus transmission. Instead, I walked around.

6. I walked around the lake

The lake was so very beautiful, the heart of Hanoi, especially in the drizzle. It was funny to see sites such as the slow procession of a whole tour group of white haired westerners being driven individually by nimble Vietnamese men on those bicycle rickshaws. And once I’d gotten my bearings, I could happily navigate the streets.

7. I avoided getting run over in the old town

Yeah, that place can be crazy, with motorbikes coming at you from every angle. Once I’d figured out that my hotel was just around the corner from it, a trip out became an obstacle course and test of my reflexes.

8. I took some cool pictures!

How picturesque those fruit sellers were set against the green and grey of the city, frozen in time. If you would like to see some more, head over to my Instagram. Or Facebook!

9. I climbed the six flights of stairs to my room

I’d been having problems with my right leg, glute and hip pretty much my whole trip, but climbing the stairs seemed to help and made me feel strong as well. It definitely got the endorphins going and it helped me feel like more of my zen French self.

I’d wanted to do some yin yoga while in Hanoi, but never made it due to distance and timing. Instead, on the last day I had a brainwave (received this idea) to go to Bikram yoga and be warm.  That day, after being with my hip and describing how it really felt in my journal, the problem went away temporarily and I was able to enjoy the heat, perspiration, stretching and poses with full use of my body. It was amaaaazing!!

PrevPreviousWhy Men Get Grumpy..
NextWhat I do when I feel angry.. like now! ( + FREE gift!)Next