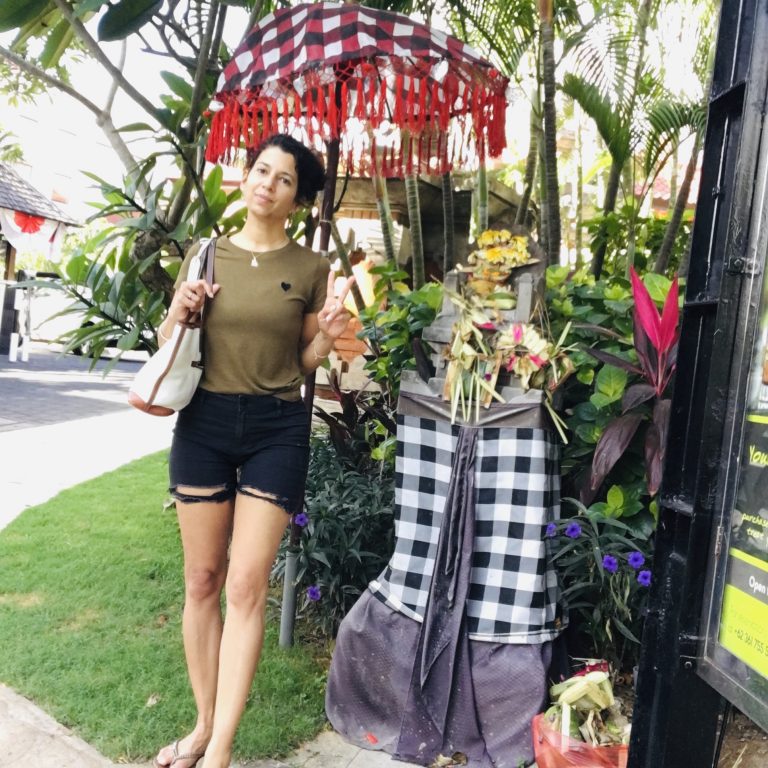 How I Manifest My Trips To Bali

Some years back at breakfast one Saturday, a friend was talking about a trip she wanted to go on and I also told of my plan to go somewhere.

Another friend asked how she was going to make it happen and they spoke about that.

Then I asked my friend why she hadn’t asked me how I was going to make it happen.

Because you always make it happen, she said.

So this post on how I manifest my trips has been a long time coming.

Because if there’s one thing I have manifested continually, it’s travel.

It started when I was 19 and went on my first trip to Bali with my friends.

But then at 20 I was going on a long trip for the millennium to Europe and Thailand and that’s the first time I really manifested it.

I was trying to save but getting so many parking and speeding fines that I gave up my car, caught the bus and rode everywhere.

I’d imagine that I was in Europe while doing it and that’s the manifesting part.

In the end I saved so much, I had enough to not work for my final semester at university.

So yes, there’s been a lot of travel over the years.

But flash forward to 2017 and my trip to Bali and Gili.

It was the first time I had been away since my life crumbled with the big brain surgery.

I’d gone back to teaching but I was only doing it part time so I could write every day too.

At the same time, I was very into the law of attraction and listening to the videos constantly.

Just be happy, take aligned action and don’t focus on the absence of your desire, that’s the basics.

I had spent a lot of time learning and implementing organisational skills, minimalism and simplicity in the six months leading up to this July too.

This is also important for the law of attraction.

I didn’t know yet how it could happen and I was two months from when I wanted to leave.

Then intuition guided me to exactly the Abraham video I needed to hear.

If you have ten things you’re trying to manifest and only one is working out, focus on that one and the rest will come into alignment.

That was the teaching.

The only thing that seemed to be truly working out then was my fitness.

But I didn’t know how to focus on it more.

One Wednesday soon after this I was sitting inside at my desk trying to work out my finances..

When a bird flew into my window!

Now Abraham says too that birds are messengers from Source because they are plentiful and in the receptive zone.

They are running on instinct and not in their heads.

A bird had never flown into my window before.

I took it as a sign and went outside for a run.

When I came back half an hour later, there was a FB msg from a friend asking if I wanted to teach this group of Japanese high school students for two weeks in July.

A week later, I went for a walk and when I came back there was a missed call from my old boss asking if I could do some relief teaching in July.

The third time it happened was my current boss asking me to do extra.

So in the end I worked more than full-time in July and had enough money to go away, pay for my mortgage and be comfortable when I returned to Perth.

When I told this story to a colleague at the time, he said it was just a co-incidence and that’s fine.

You don’t have to believe.

I use this method for manifesting other things also.

In 2019, I went to India for three weeks to celebrate my parents 50th wedding anniversary and Singapore on the way home.

I loved Singapore so much this time that I decided I’d be back in a year.

In August my friends had our four-day Festival of Forty in Bali and I stayed for a month.

Then in October I felt the pull to go away again at the end of the year because I wanted to celebrate my birthday alone and go on this trip through Thailand by rail and up the Mekong on the slow-boat to visit Laos.

The trip I did at 20 with the boyfriend.

I wanted to do it solo.

And I wanted to go away till I felt to come home.

I realised that was 5.5 weeks but I still stayed on to visit Hanoi and Da Nang in Vietnam before having those two amazing days in Singapore.

So I’m really happy that I was true to my desires and didn’t care if other people think I’m irresponsible or whatever.

Because of this I haven’t minded being locked in West Australia for two years.

It feels good to me.

Though I do look forward to travelling again.

Before (and because of) that seven-week trip, I  was asked to teach this bridging course at the school I was working at so it provided most of the money to go away.

I also have to say that in 2016, after the brain surgery, I got rid of my credit card and have been managing money much better since then.

I’ve had private coaching around money and also have studied a lot of wealth consciousness throughout the years.

Lately getting into some manifesting teachers again, I’m pleased at how they emphasise savings too.

Anyway, this is just a side note.

Sometimes I already have the money for my desires and other times I manifest it.

That was the only time I focused on fitness.

Mostly I’m just open to how it can come in and focused on living and enjoying my life and practising presence.

Another side note, I don’t mind how the money comes in.

Sometimes it’s through work and other times gifts, sales..saving.

A lot of people have a problem with and feel guilty about receiving.

But that’s my process for manifesting my trips.

If you’d like more from me on manifesting, check out MAGNETISE.

Let me know in the comments below if you have anything to add or ask. How good are you at receiving?

P.s. I haven’t been posting there for a while but I did post some of these trips at Wonderlusting_xx on Insta. For my life today it’s @mireilleparker_xx.