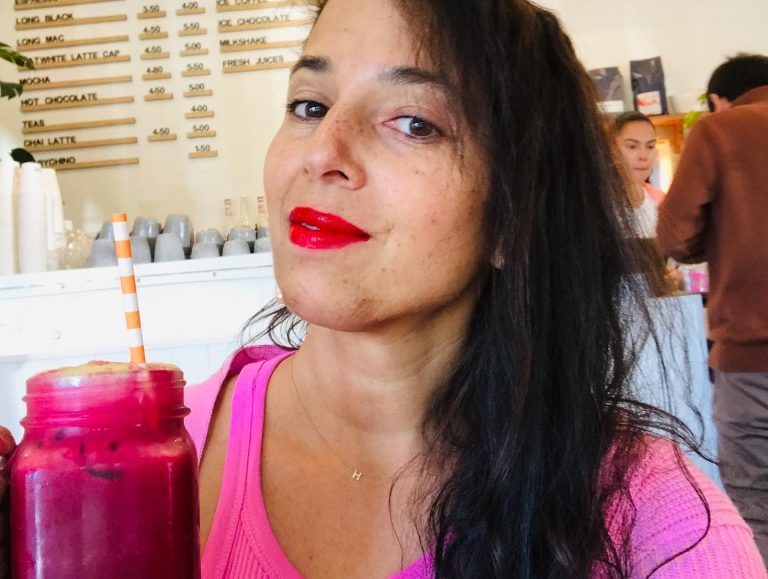 Have you noticed how a lot of celebs are talking about manifesting abundance these days?

It was her reading a passage from her autobiography.

Selling the book, you know.

I didn’t watch it.

Then there was one with Jay Shetty interviewing Khloe Kardashian on ‘manifesting abundance’.

The first fifteen minutes were on being kind.

I didn’t watch more than a few minutes.

I love Khloe but I found it boring.

She was talking about how most people don’t smile at the waiters and that kind of stuff.

I know she can’t get out much and is probably more referring to trolls on the internet skewing her perception of the general public.

But most people in real life are REALLY kind!

Listen, I worked as a waitress in Soho, New York, at a bar in Marylebone, London, in an Indian restaurant and pushing a donut cart at the beach in Montpellier, France, and at a deli in Perth and a catering company for four years in my late teens.

That’s what I remember.

The waitress probably looked surprised because it was Khloe Kardashian!

Not because people aren’t kind.

If we step out from behind the screen, there is much beauty in reality to be found.

There is much kindness when we change our filter.

Our beliefs create our reality.

95% of what we experience during the day is forgotten, filtered out.

What we remember is what we believe.

In psychology this is called Confirmation Bias.

To program our subconscious minds with new beliefs, we can look for positive stories.

And reduce the rest.

There was a video from Mina Le called ‘Celebrities Need To STOP Creating Beauty Brands!’

I agree, on one hand.

I mean I get it, they want to make a shit ton of money and there’s nothing wrong with that.

Cashing in on the personal brand they’ve cultivated.

Inspired by Kylie Jenner becoming a billionaire by 25 no doubt.

And why should all the big business have all the money?

Just because they always have.

But also, what about the environment?!

Most plastics, I learned from the video can’t be recycled and aren’t.

What I find weird too is perfume.

In the Abercrombie and Fitch documentary on Netflix, one expert said that the actual clothing is only a very small portion of what’d being sold.

An image and a feeling is the magnetism.

Such is the power of marketing.

But feelings are powerful and isn’t it worth every cent then!

The law of attraction says so.

Still, some things seem like the story of The Emperor’s New Clothes.

A Few of My Favourite Things

This is not the blog post I intended to write today but this is what is here.

Between reading 50 pages of Love Queen, my up-coming memoir, and the painting guy coming to give me a quote.

These are my thoughts.

He has been awarded the Mark Twain award for comedy in 2022.

It was really funny and I ended up only going to bed at midnight.

I ate my bean and veg soup on my living room floor, in front of the heater.

Because I have no functional kitchen until tomorrow when the electrician comes.

And I like to eat in front of the heater.

A rug is underneath.

I’m not sure if Khloe or Aleisha would concur but that’s what works for me.

I’ve also put even more in MAGNETISE, the transformational guide that’s currently at an ebook price.

You can get it from my shop here.

I’m going to be having a winter holiday at home in July I’ve decided.

So I’ll see you again in August and tell you what I did.