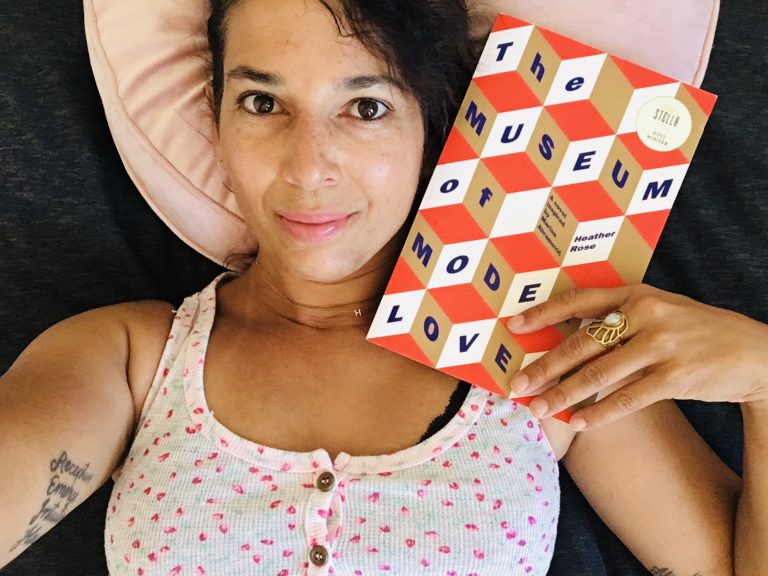 “Love accounted for many things. A series of biological and chemical interactions. A bout of responsibility. An invisible wave of normality that had been romanticised and externalised. A form of required connection to ensure procreation. A strategic response to prevent loneliness and maintain social structures.”

Have you heard of the performance and conceptual artist Marina Abramovic?

She is Serbian and has been making performance art for over forty years.

Perhaps you know of the show she did at The Moma in New York  in 2009, The Artist Is Present?

The Artist Is Present

For three months she sat motionless in a chair in the middle of a gallery and members of the public could come and sit across a table from her.

“I have the empty chair, so everybody from the audience can come on his free time and sit in the front of me, and engage in this kind of silence, experience of the here and now, the present moment.”

“Just sit motionless, and see what happen if we connect with our eyes. And I really think that it’s going to be something quite special to go into this unknown territory.”

Have you ever sat and stared into someone eyes for a few minutes?

I used to include this exercise in my workshops.

It can be very healing.

“Do you expect to be broken open sitting across from a stranger and staring into their eyes?”

James Franco sat, Bjork sat and so did 1543 others.

Marina sat for 736 hours in total.

She was in her sixties at the time and sat from 9am to 6pm every day for those seventy-five days, barely moving.

It was physically hard on her body.

But this is what she explores in her work.

And the relationship between the performer and the audience.

To test these limits in 1974, she did a piece where she placed 72 objects on a table, including a scalpel honey, a rose, a whip, olive oil and a gun with a single bullet.

For six hours she allowed the audience to manipulate her body without consequence.

At first they were passive.

But by the end she had had her clothes cut off, cuts made in her neck and markings of aggression on her body.

She realised that they might have “killed her for their personal enjoyment.”

For ten years Abramovic was in a relationship and created art with West German performance artist Ulay.

To give the end of their relationship a fitting ending, they  performed a piece called Lovers.

For 90 days in 1988 they walked The Great Wall of China and met in the middle at the end.

Marina walked from The Yellow Sea and Ulay from The Gobi Dessert.

I have walked part of the Great Wall for a few hours and it was one of the most physically demanding things I have ever done.

The steps are huge!

When Marina and Ulay met in the middle, after their 90-days of walking in silence, their promise was to say good-bye and never speak again.

Until 22 years later at The Artist Is Present.

When Ulay turned up and sat before her, tears soon started welling in her eyes.

It is the most beautiful moment.

Watch it here if you would like to feel something real on a weekday.

How true is it that when we are angry we won’t look into each others eyes?

And see the human in there.

How often we hurt and say things to wound.

Because of what we are really feeling.

Sometimes too deep inside to even see it.

The Museum of Modern Love

The Museum of Modern Love is a wonderful book that I bought after hearing the writer, Heather Rose, speak at a Writers and Readers festival a few years ago.

It is an imagined tale of an old film composer who is going to The Artist Is Present in New York.

“As he watches and meets the other people drawn to the exhibit, he slowly starts to understand what he might be missing in his life and what he must do. ”

Heather is an Australian author living in Tasmania.

She travelled to the exhibition but had never met Abramovic in the ten years she was writing the book.

Though Marina is quoted as saying “I love this book” on the red back cover.

So there we have it, another breakup story.

And this one as epic as it should be.