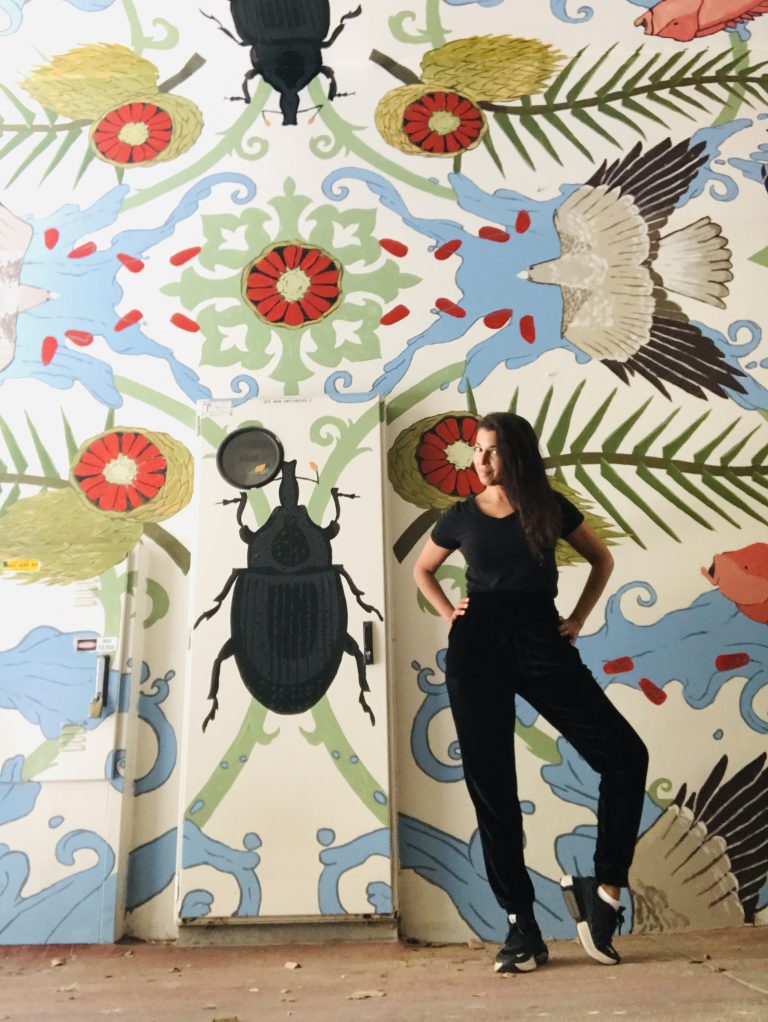 The Peach and The Aubergine

When I was thirteen and had just started at a high school where I only knew two others in my whole year, I was quite obsessed with the 90s Supermodels.

Instead of taking art, I had chosen theatre arts and home economics.

I liked acting and cooking too.

My cousin Amanda and I had a cake-baking business from when we were ten.

We made up a jingle and a dance and would perform it at family gatherings to advertise our business.

Miranda & Co we called it.

We made posters too of course and put them on the walls.

But I didn’t take art in highschool because I wanted to explore these new subjects.

Not having a creative outlet, I turned myself into the art project.

Because my mum didn’t want me to dance in competitions that year to focus on my studies, I had Wednesday afternoons free and took a grooming and deportment course after school.

I wanted to be a model like the ones I saw in magazines.

Fame appealed to me for the same reason.

I was at an all-girls private school and only had my imagination to dwell in.

A Projector in Human Design, I thought I was beautiful at times but I wanted to be ‘recognised’ as such.

Two years later, I had my first pash and everything else followed quickly after that.

It took me a really long time to get over wanting someone else to see me.

But learning is not, as many masculine plot lines demonstrate, so linear.

For me, it was very cyclical.

In the feminine way.

I learned lessons time and time again, going deeper, swinging back around, learning and then learning again.

Last night I was watching this video on COVID and the new way of being that 2027 is bringing, from Karen Curry Parker on Human Design.

We are moving towards a feminine style of leadership, which involves collaboration and sustainability.

She mentioned this masculine plot line compared with the feminine.

It excited me because Love Queen, my upcoming memoir is written in more of a feminine way!

Cirlcling and going deeper into the story.

Healing the part of me that wants to be seen is what my memoir is about.

It also related to some experiences I’ve had this week.

On Saturday I went to the city and took some photos of myself in some beautiful alleys stinking of urine.

‘I wanted to be a model at thirteen and look how far I’ve come!’ I laughed to myself on the train home, as one woman shouted obsenities at other passengers and we all sat with our heads down and masks up.

The inner city of Perth really is The Wild West at times.

After three hours, I was ready to lie in bed for the rest of the evening.

I have realised how important this is to me as a Projector.

Another funny thing that happened was, about a week ago, this guy slid into my Instagram DMs and told me I’m hot.

So basically some chatting went on.

He works fly in fly out and seemed interesting.

It got to a point in the chat where I asked what his favourite place in WA is.

The reason I wrote this is because I’d seen a documentary years ago and Victoria Beckham said this to David when they first met.

So I wanted to try it out.

After, I looked up Victoria’s Human Design and saw she’s a Manifesting Generator.

‘Was hoping you’d ask me in (laughing face)’ he replied.

His account was of his art work and I thought it was cool.

I told him he was hot but I’d have to like his personality first.

‘U could get to know me (winky face)’

He sent an aubergine and peach emoji.

‘Is this getting to know you? (laughing face)’ I sent.

In the end I asked if he was just looking for a place to stay.

‘Looking for some fun’ he replied.

‘Ok! Well I’m not into casual sex & you’d have to do a lot more than tell me I’m hot & send me the aubergine & peach emoji.’

‘So don’t waste your time’.