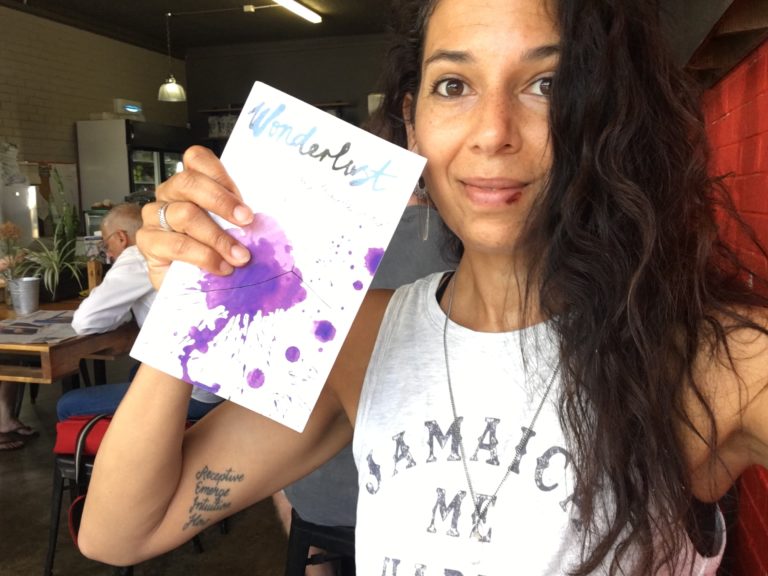 It is exactly three years ago today that I had the epiphany that I had been striving my whole life and I was done with it. I had no job, no income, no savings, a third of my hair gone, I looked like a strange alien, I couldn’t date or travel. I couldn’t escape. And I felt like every decision had been a mistake. I decided, with no other option, that I had to just be here now. What followed was the best year of my life. Then I got the 8 tattoos. So yeah, I have 14.11.2017 tattooed to my foot.

But anyway, all that is the subject of my second book – due out next year. Join the list here to stay in the loop.

The funny thing I was thinking about was how six years ago, I quit my job at the hotel management university and declared with a photo and post on Facebook that I didn’t know what I was going to do but I was going to write. Then I bumped into Gina DeVee in a Paris cafe, then I became a coach, then I had the tumour, then I deleted all my YouTube videos accidentally, then I stopped, then I was put in an induced menopause, then I went to do meditation cos I couldn’t sleep from the hot flashes, then I had a dream there, then I went back to teaching. Then, thanks to teaching I went to Bali, where I met that guy in the cafe, then I decided to publish my books on Amazon. And here I am. Six years in the making!

Abraham says that sometimes we aren’t ready for what we want so we get the ‘letting in process’. Yep! At the time I was barking up the wrong tree, thinking I had to be a blogger to be a writer.

But enough about me.

“The West Australian newspaper reported that a third of our people would be on anti-depressants in their lifetime. That’s right, one third. I never thought I’d be one of them, but I’d grown tired of people talking at me. It is assumed that what I want is what everyone else wants and when we act out, we have to be convinced to get back into the comfort zone.

There was a series of events that led to my uprising, which obviously included the Oprah epiphany. Perth, my home city, had gone through a mining boom and apparently everyone was getting rich – except those who weren’t. It was plasma screens galore and if you didn’t have a 4WD, you were probably going to get run over by one. People talked about the mining jobs ‘up north’ with dollar signs flashing in their eyes. Up north was the end of the rainbow. There were tales of cleaners getting $100, 000 to work on a mine site and we wondered if we could do it too. I, apparently, had too much pride to make my fortune. Still, it was nice to be able to spell. At least my English Literature degree was good for that.”

Read the rest of the sample here :  Wonderlust on Amazon.

“Although set in a time before smart phones and Instagram, the underlying message in ‘Wonderlust’ that “life’s just not like that”, has never been more relevant than in today’s world of unrealistic expectations and instant gratification. 20 something Sarah lives with her parents in Perth and struggles to switch off from reality T.V. Sound relatable anyone? She moves to lucern, Switzerland to immerse herself in European culture and search for a deeper connection. However things don’t turn out quite like she imagined.

What sets Wonderlust apart from other coming of age novels out there, is that its void of the usual sentiment that’s typically hammered home in familiar life lesson stories. It’s raw and beautifully written. You see and feel Lucerne in all its beauty. You know the characters and you’re sipping tea with them, talking about art and life. The cherry on top is Sarah’s laugh out loud wit and of course.. the sex!

Wonderlust is unapologetically true to life with all its highs and lows and funny bits inbetween. It’s immensely enjoyable and I absolutely loved it! So will you. Well done Mireille!”

People have been asking about the paperback and yes it’s available from the US and UK site at least and will deliver to Australia by the start of December if you order now.  Perfect for holidays and  Xmas! And of course the digital is available as ever.   Check us out here www.amazon.com/author/mireilleparker

Thanks so much for being here! Enjoy!