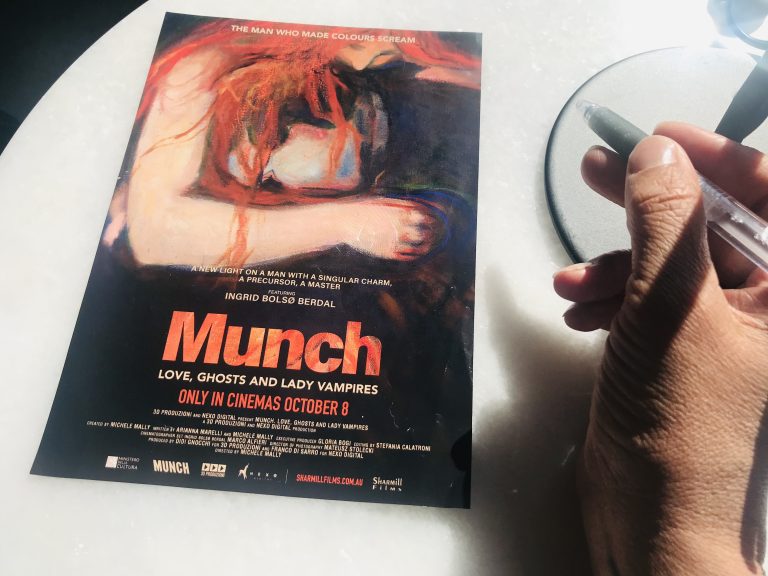 The Man Who Made Colours Scream : The Story of Munch!

What I did well yesterday was…

1.Recycle all the cardboard. My garage is now mostly cardboard free!

2. Not accept the invitation from the man in Kings Park (Terry) to go right then and there for dinner. He said I looked tired + I said I’d walked to the end of Kings Park. Where to now? I’m going for dinner. For one or two? I laughed/smiled. He asked where I was from + I said Perth. Him, Perth. But you have a nice accent, he said. I’ve lived overseas. He was really from the northwest of England. And me? Born in Perth. You look more exotic than that. My mum’s Indian.

He gave me his card. He was in a big black van. Do you give out your number, he’d asked. I’ll give you mine. That’s a big van. Do you have kids? I used to drive them in this but now it’s just for me. He was probably 60 + when I went to get his card I saw he had a big belly + grey teeth. Blue eyes. No. I desire sb fit + not sb sitting in Kings Park casting their line in, driving the same car for 20 years. A test. I looked so sweet in my orange shorts + shirt though.

3. Go to Munch on Edvard at Luna Leederville. It felt good to drive in the sunshine + go somewhere different. It was good to know I don’t have to nap every day. That’s quite limiting. Munch (“mʌnk”) was from Oslo, Norway + grew up at the end of the 19th C in the slums, as the city converted from medieval to industrial. Apartment buildings were built but some on the ground floor still kept a cow in their home.

His mother + older sister died of tuberculosis + he was under the care of his maniacal lutheran father, who was a doctor but treated the poor to atone for his sins. His aunt raised them + encouraged drawing, keeping them all. His brother did tropical locations as he wanted to be an explorer, but Edvard did trolls + other creatures from Norwegian fairy tales, which were scary + more for adults. His father read them Edgar Allen Poe too. The brother died and the remaining sister went mad (schizophrenia) + was institutionalised. The aunt died of tuberculosis too.

Munch did maths and science at uni, but by 20 his paintings were already being exhibited + bought. When sb bought his work, he’d reproduce it to keep them all himself. He was part of the bohemian circle in Oslo, who were polyamorous + the females liberated, of artists, play-writes, writers etc. A Doll’s House, about a woman rejecting motherhood + wifedom, was written by sb in the circle that Edward shared a lover with. It is still the most performed play worldwide today.

The bourgeois street Karl sb the elite would parade down, named after the king. Norway + Sweden still had one king. Munch exhibited in Berlin but it was shut down after one week. He used this fact to market elsewhere. Edvard painted past or current lovers. Afraid of women + entrapment. Their long hair representing this. And symbolising waves, like of newly invented TV + radio. Munch was into photography + later film. He loved watching movies.

One summer, he went to the seaside for some months + photographed and painted himself and other males nude. Two sisters were staying with him. He turned to alcohol more + more. Finally, he checked himself into a mental institution, where he received electric shock therapy, but also painted daily. He feared he was becoming mad like his sister, but through eight months in the asylum + abstinence of alcohol, he was cured, and never had a drink again. Except a glass of champagne before going to the dentist.

Walking near his sister’s asylum on a hill overlooking Oslo one day, where there was also an abattoir, hearing the screams, he heard, what he called, “the universal scream”. This was what he painted in his most famous work, The Scream.

Later in life, he moved to the countryside where his family were originally from. The Munchs were part of the intellectual elite. The documentary was subtitled Love, Ghosts and Lady Vampires because of the losses he suffered and his relationships with women. One lover was killed by her other lover, Edvard’s friend, and this affected him greatly. The closest he ever came to having a girlfriend was a woman he didn’t “like” that much. Once, she pretended she was going to kill herself so he would come to see her and, when he refused to marry her, she shot him in the hand. That was the end of the relationship. Munch died at the age of 80, surrounded by his paintings.

Before I watched this documentary, I only knew of The Scream, but I so loved Edward’s use of colour and his other paintings. I am a fan of colour, as you can see in my art @locomotive_creations on Instagram. Or my personal page @mireilleparker_xx.

If you enjoyed this excerpt from my journal, you will love my upcoming memoir Love Queen. Do subscribe to be one of my dear Museletter readers for a weekly dose of musings, inspiration and entertainment. You will also be the first to know when my memoir is coming out.

And to continue the conversation, check out The Creative Life : From Bollywood To Book Writing, which is my interview on Polly Alexandre’s The Feminine Millionaire Show. It’s on Apple or Spotify too.

To complement this, last week’s episode of my Living Deeply Stories podcast was On Creativity! I share ten points on and tips for being more creative. It’s also on Apple or iVoox or elsewhere podcasts are found.