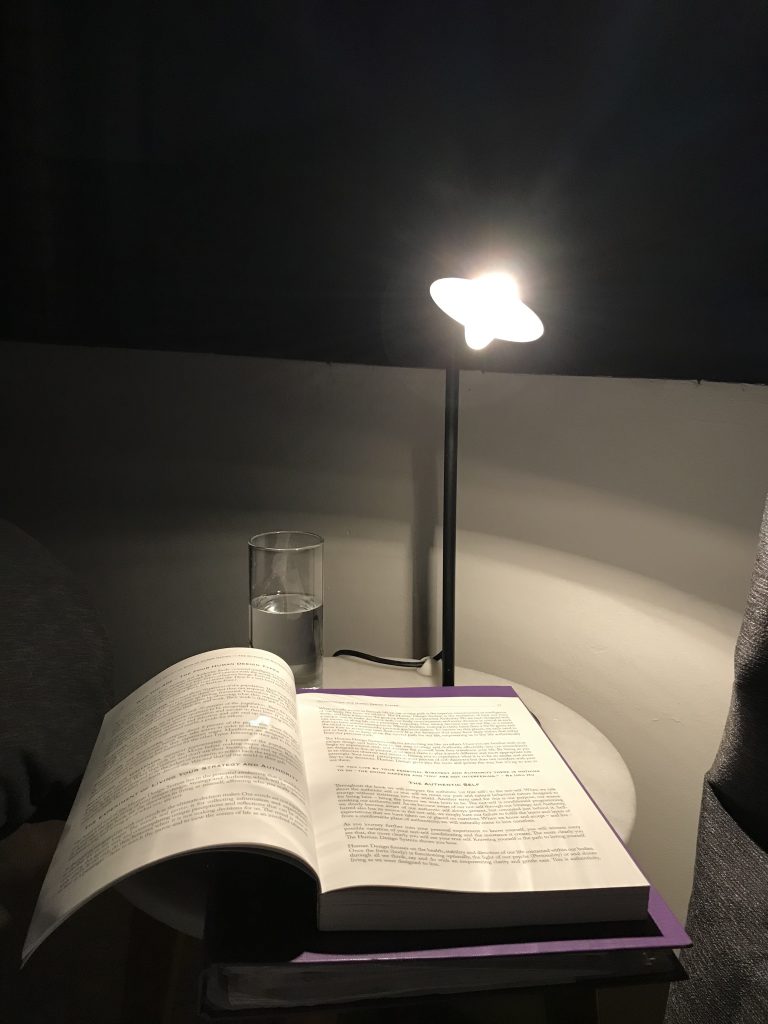 Yesterday evening as the rain came down hard and the tall eucalyptus danced in the wind, becoming black as the ceiling of the sky grew dark grey, I started reading The Definitive Book of Human Design : The Science of Differentiation by Lynda Bunnell and Ra Uru Hu.

I was sitting in the comfortable black chair I’d recently bought to look at this beautiful tree which stretched high above the rooftops and drinking a rich hot chocolate that I’d made with almond milk.

I’ve read parts of this book before, to try and figure out my life and way to success. But now I felt to read it from start to finish.

And oh my God!

I’m going to recount what I read now so that I’ll remember it.

Hopefully you’ll find it intereting too!

Most important to recognise is that this is knowledge to be experimented with. There is a ‘way’ but it can only be your way. Allow this work to guide and inform you and then, if it is correct for you, enter into the most extraordinary journey of your life.”

It’s a seven year process of experimentation with Human Design Strategy and Authority because it takes seven years for all the cells in the body to regenerate. This is called the ‘de-conditioning’.

As a Splenic Projector, my strategy is to wait for the invitation and authority is the spleen. I hear it as an impulse from within when I ask questions especially.

Waiting for the invitation actually means, “hey I’m over here doing cool shit, come and get me if you need me”.

This is what my chart looks like, to give you an example.. 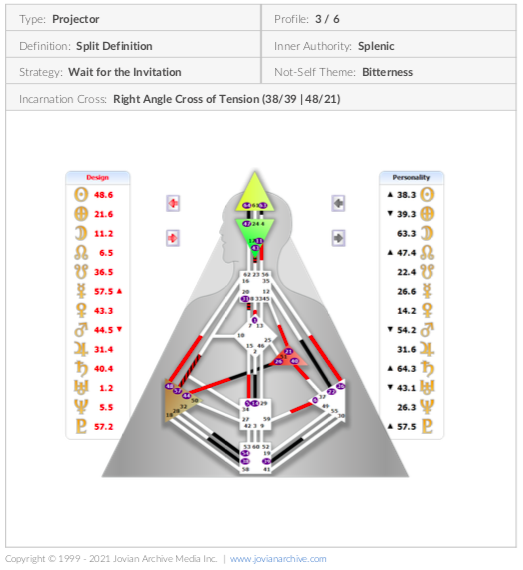 You can get your free chart from The International School of Human Design at www.ihdschool.com

The Birth of Human Design

On January 3rd 1987, my eighth birthday, Ra Uru Hu was living on the island of Ibiza when, late in the day, he heard “The Voice” for the first time.

For 8 days straight The Voice penetrated him, revealing scientific information on the origins and workings of the universe and gave him the formula for The Human Design System.

At the peak of early summer in 1987, there was also a supernova, the death of the star closest to earth, 400 years away.

As it died, it bombarded our planet with subatomic information and for 14 minutes  everybody received 3x as many neutrinos as normal.

The impact of this event on human consciousness continues until this day.

When I was eight, I suffered from a mysterious illness and had to be off school for a long time.

Proectors are here to hold the template of the next phase of evolution in 2027, when we will transition to a femine way of leadership, which involves sustainability and collaboration. And to clear the energy of the collective.

This is why we need a lot of rest.

I wonder if my illness at eight was related to the supernova.

In June and July I went on a five-week trip with my parents across the USA and after that wanted to be a pilot till age 14.

From 1987 to 2011, when Ra suddenly died, he experimented with and taught Human Design around the world.

According to The Voice, 1781, when planet Uranus was discovered, marked a major evolutionary shift from the mind-directed and other-directed 7-centred being (as the traditional chakra system displays) to our more sophisticated 9-centred transitional forms.

We all are 9-centred beings, as can be seen on my chart in the coloured (defined) or white (undefined) shapes.

Human Design is a synthesis of two types of science : The ancient observational systems of Asyrology, The Chinese I’Ching, the Hindu-Brahmin Chakras and The Tree of Life from the Zohar/Kabbalist tradition, and the contemporary disciplines of Quantum Mechanics, Astronomy, Genetics and Biochemistry.

Human Design is not something you have to believe. It is a personal experiment.

13.7 billion years ago our universe began with the Big Bang.

Before this everything that had mass existed in one single particle that was smaller than an atom.

Something sparked the explosion of that atom, causing the universe to expand and continue to expand at an ever-increasing rate.

Everything that existed separated into two groups, creating a basic duality.

The Yin (feminine) has mass and consists of six Quarks, the smallest building blocks of matter.

Scientists gave them the names “up, down, strange, charm, beauty and truth” and they appear usually in combination.

The Yang (masculine) family contain six Leptons, which are considered to be pure energy or light.

Three of the Leptons are Elecrons, which are negatively charged particles and three are different types of Neutrinos.

Protons, Netrons and Electrons come together to make up an Atom.

Protons and Netrons are at the centre and Electrons surround it.

So it is true that the Proton, being positively charged, and the Neutron “attract” or “magnetise” (in the feminine way) the negatively charged (masculine) “neutron”.

And it is scientifically true then that we all have both yin and yang energy within us.

Scientists say that only  only 1/10 of the universe is “atomic” (has mass) and the rest is dark matter and dark energy, the Neutrino.

They move 1-2% slower than light so they cannot be pure energy.

By 1998, scientists had proven that these particles have a mass of one-millionth the weight of one proton.

“These tiny cosmic messengers are referred to as the breath of the stars, the exhaled energy of stellar fusion.”

There are more neutrinos than anything else in the universe, passing through every part of our planet.

The sun produces 70% of the neutrinos in our solar system and the other 30% comes from other stars in The Milky Way Galaxy and a small percentage from Jupiter.

Neutrinos can be seen as what the ancients called chi or prana.

These particles are penetrating us with information continuously, meaning we live and move through a vast information field.

Conception of The Universe

The Voice described the Big Bang as merely the conception of the universe.

We are a giant living fetus moving toward the moment of birth!

The yin seed contained all the atomic material of the universe and when it joined with yang seed, there was shattering (the Big Bang) and an infinite number of (crystaline) consciousnesses were created.

The Personality Crystal of Consciousness, the aspect of the original yang seed, is the Head Centre (just above the scalp) in the HD body graph. This is who you think you are and the ‘passenger’ consciousness.

The Design Crystal of Consciousness, the original yin seed, is the Anja Centre (between the eyebrows) and manifests the biogenetics of the body. It is the ‘vehicle’ or form consciousness.

The Magnetic Monoplole or the G-Center (part of the heart) is the ‘driver’ and carries a single magnetic attraction.

This was scientifically substantiated in 2009 but had been seacrhed for since the 1920s. 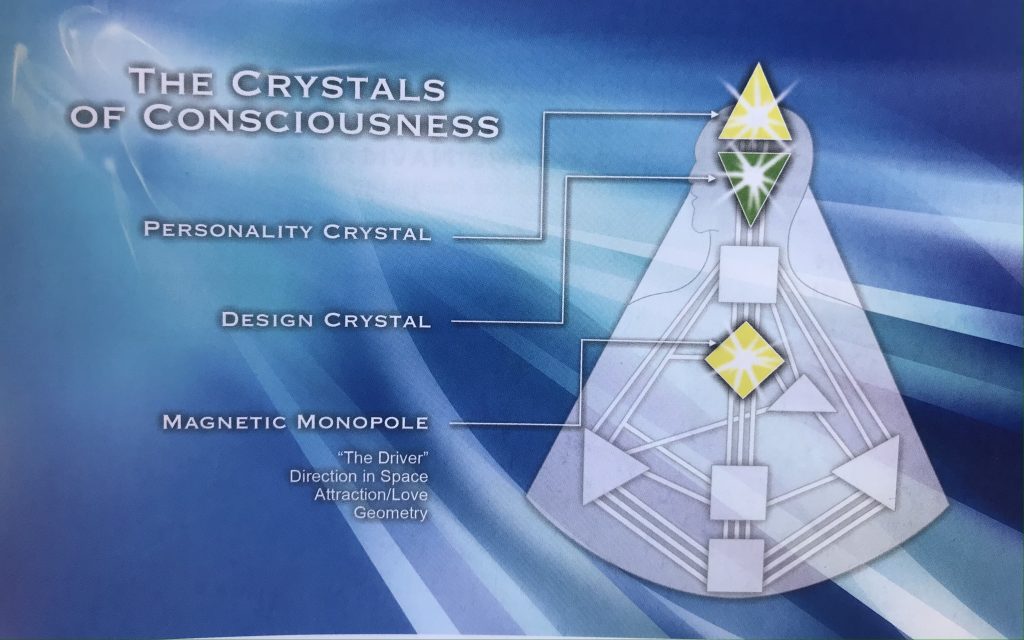 The G-Centre has two functions : It holds everything together in the “illusion” of separateness and the Personality and Design Crystals in union. It also guides us along our path or our geometry in life, which we call destiny.

Recently I learned from Karen Curry Parker’s YouTube video on the G-Centre that it is the magnet with which we attract and to look at which gates are defined off it.

Mine is #1, as you can see in my body graph, which is “The Creative – The Gate of Sef-Expression”.

My friend Shannah has the same and she is an impressionist landscape painter so it makes sense.

What I find cool about learning this and Human Design is listening to Intuition.

I don’t even call it ‘my’ Intuition because it is the connection to In-tell-i-gence, All That Is, The Quantum Field.

I wrote an article about Human Design and Intuition last year.